Another easy (and fun!) way to help identify when an item was made is to make note of any notions on the garment.

“Notions” is a sewing term that refers to any small object that is affixed to the final product. This can include anything from buttons and zippers to bias tape and snaps.

Before the 1930s, snaps were the most common closure tool, in combination with hook-and-eye closures.

Remember the zipper fix I did on this dress? 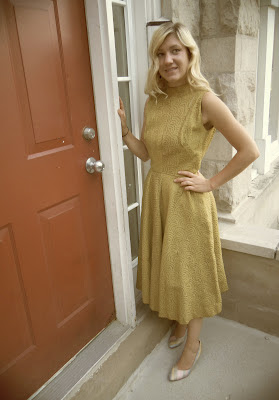 It was a metal zipper. If you find a vintage garment with a metal zipper, you may be looking at something from the 1960s or earlier.

Another way help you identify an item’s age is the use of elastic. Elastic was not widely used in garments until the 1940s, though it was invented much earlier than that. Up until the 1970s, many companies sewed “pillow tabs” over where the elastic pieces met to prevent chaffing.

There are so many different kinds of notions that can be used on a garment that I could go on forever about it. Which is why I’ll include a part two on notions down the road a bit.

Keep in mind that you need to look at the entire piece when dating vintage clothes. Using these new guidelines on notions with the tips on dating seams from last week will give you a good shot to dating a piece accurately.

Stay tuned, though. Next week I’ll talk about labels! Exciting, I know 🙂